You Are Here: Home → 2019 → September → Climate Change and the Thwaites Glacier

Climate Change and the Thwaites Glacier 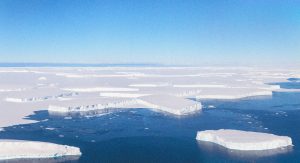 The Twaites Glacier is located in the Amundsen Sea in Western Antarctica. The Twaites Glacier is one of the fastest melting glaciers in Antarctica. It is tied with the Pine Island glacier. Since the 1970s these glaciers have been retreating and deteriorating increasingly more over the years. One point on each glacier moves four kilometers closer to the sea per year and also dumps around 45 billion tons of ice into the sea every year. Since 1970 these glaciers have been retreating faster every year. The Twaites has seventy-five miles of it that touch the sea, the Pine island only one third of the Twaites, but it still retreats just as fast as the Twaites, possibly faster. If all the ice in the Amundsen Sea melts, it  could cause the global sea level to go up ten feet.

Scientists believe that if the Twaites glacier fails, the entire Amundsen Sea area will be completely destabilized, causing all the other glaciers in the area to melt even faster than the Thwaites did. Scientists recently found old films from the 1970s when the Americans, British, and Danish scientists took aerial films of the area. After viewing the old films, scientists could see how much of the ice melted between the 1970s and now. 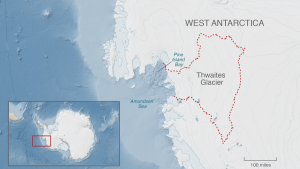 The glacier could be melting even faster than what the scientists predicted. Back in 2016 the National Science Foundation and the U.K.’s Natural Environment Research Council decided to fund a research project for the glacier. We still don’t know exactly what shape the glacier is in because there were no major research projects done on the glacier until this started in 2016. The article that has all this information also says that it will take a couple of years for the scientists to even get to the glacier. These glaciers are melting as quickly as they are because they are being exposed to warmer water at depth, causing the glaciers to melt in the middle, then fall apart at the surface. This is the reason why they are deteriorating so quickly. Once parts break off, the glacier melts even faster because of the increased surface area that the water has access to. The seabed where the glaciers are on does not help the situation. The seafloor were the glaciers are sitting on is sloped. This helps speed up the process by causing the glaciers pieces to break off much more easily. 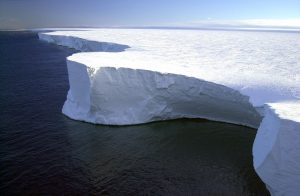