You Are Here: Home → 2019 → September → Flint is Losing Hope For Ever Having Clean Water

Flint is Losing Hope For Ever Having Clean Water 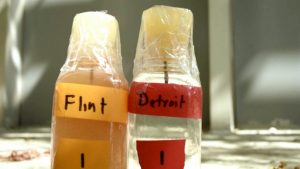 In April of 2014, Flint, Michigan switched their drinking water supply from Detroit city to Flint River in order to save money. Before allowing the community to start drinking the water, officials never tested the water properly to ensure that it was drinkable. Lead infected the water and the residents did not know until at least 12 people died.

The entire town has to use bottled water for everything from drinking to cooking. Families usually use 2 cases of plastic bottles a day. There are three pick-up locations to get the cases and they are supplied by the government and donations. Using plastic water bottles for everything every day is not only extremely inconvenient, but also significantly harmful for the environment.

The town of Flint has already gone through a failed criminal investigation. Since this community is so poor, it is necessary to find out who to blame for not testing the water properly. Todd Flood, a special prosecutor, spent three years running an investigation on the officials. He was recently let go because no one was in jail yet after many years. This means that the three-year trial now has to restart because there is a new team in, and the town of Flint could not be more upset. Many citizens have no hope that the water will be clean anytime soon.