On September 7, many people in and around Tunisia tuned into the country’s first televised presidential debate. This was a landmark event for a Middle Eastern country, as very recently, Tunisia, and many surrounding countries underwent the “Arab Spring”. This was a series of uprisings and revolutions in countries spanning the Middle East and North Africa, starting in Tunisia. The televising of the extremely democratic event of a presidential debate shows the catalyst for a movement of change in the East, to the Westernization of the East in terms of governments dominated by democracy.

On December 17, 2010, Mohamed Bouazizi started what would later be known as the “Arab Spring”. On this day, Bouazizi was trying to sell fruits and vegetables in his small town, Sidi Bouzid, in Tunisia, to provide for his family. However, while in the process of setting up his cart, a policewoman told him to hand over his cart. He refused and was slapped by this police officer. To his embarrassment and humiliation, he set himself on fire in front of a government building. Bouazizi’s actions inspired others in Sidi Bouzid, and others felt similarly towards the government, and soon later protests began. Days later, protests across the country forced President Zine El Abidine Ben Ali to step down and flee the country. Following this, other Middle Eastern countries had with protests of their own. 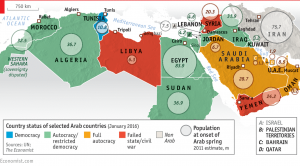 Tunisia’s first televised presidential debate shows the culmination of their efforts in implementing a new government and their success in doing so. It highlights how successful the Arab Spring was in the country where it all began. The entire Arab Spring can be seen as a prelude for change. Previously, almost the entire Middle East was dominated by authoritarian states and their dictators. However, countries such as Tunisia give hope to the Middle East in their goals to Westernize.

The actual election went well, but did not live up to it’s great expectations. Many thought the debate would be very hot, but rules for the debate itself held it back: “The first debate had been eagerly anticipated by Tunisians as a way to test the waters in the crowded race that many analysts say is too close to call, but strict rules against “provocative” statements meant candidates had little room to challenge each other”. Perhaps these expectations came from very electric American presidential debates. Former minister Mabrouk Korchid even said, “The lack of spirited exchanges led to an unattractive debate that did not serve the candidates” in a Facebook post. Nonetheless, for the debates to have the effect as they do in the US, rules against provocative statements must be reversed. Many people were also disappointed due to the lack of a frontrunner in the debates.

Although the debates might not have lived up to expectations, their importance was felt across the Middle East, and is a sign of change for a part of the world that strongly needs it. The Arab Spring can be seen as the birth of modern democracy making its way into the Middle East. If countries in the Middle East keep morphing into countries of democracy, the 21st century could be a very different place. 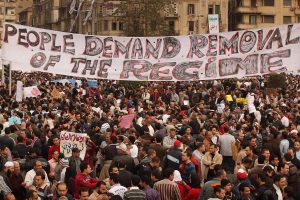