A man has broken the record for the deepest dive 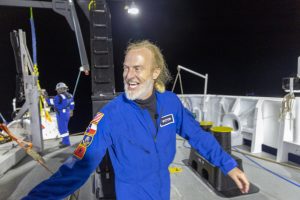 ever completed by a human in every ocean in the world. Victor Vescovo, the man who made the series of dives, is a natural explorer and thrill seeker. Before going to the deepest depths in all 5 oceans, he climbed the tallest mountain in every continent. These climbs consist of Mount Everest(29,035ft) in Asia, Mount Aconcagua(22,829ft) in South America, Mount McKinley(20,320ft) in North America, Mount Kilimanjaro(19,340ft) in Africa, and Mount Elbrus(18,510ft) in Europe.
Before setting the record for the deepest dive, film director James Cameron held the honor with a dive of 35,787ft. This is just 66 feet shorter than Vescovo’s dive and was completed in 2012. This is equally as impressive because of the lack of technology at this time. Vescovo said that with all of the great technology that he had at hand, staving off all of the pressure exerted by the water, his trip to the bottom was actually peaceful.
This story was actually a long time coming. Vescovo thought about completing his now record-setting dive in 2012, just after he finished scaling the tallest mountain in each continent. He ended up completing the dive in his second attempt exploring the Mariana Trench. Vescovo said that his biggest setback was designing a vehicle that could bring him down and back up safely. To do so, it would have to be able to hold firm with all of the pressure pushing against it. Vescovo’s worst fear was that at one point, the vehicle would begin to leak and that it would be too late to fix or go back up.
This individual story may not have long term affects, but the story of sea exploration as a whole will continue to be an interesting topic to monitor. This will be the case until there is no more water left unseen by human.