You Are Here: Home → 2019 → October → Climate Change’s Effects on Greenland 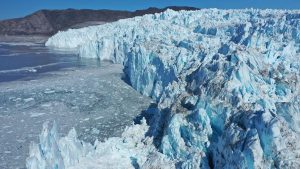 The Greenland ice sheet has had many problems in the past with climate change and increasing temperatures. Since the early 2000s the glacier that used to cover almost all of Greenland has started to break apart exponentially more as each year passes. The ice that is in Greenland could raise the worldwide sea level by over twenty feet. Recently, Greenland was hit by a heatwave that cause the glacier to melt much more than normal. Scientists said that the melting this year came very early and the snow that came was also well below the normal amount. The temperature in Greenland during the heatwave was an astonishing 40 degrees above average. 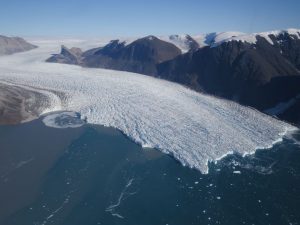 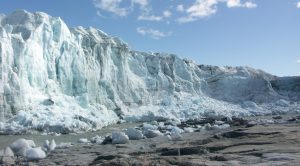 This extreme heat caused some places to melt faster than the previous 2012 season. 2012 was the worst year for the glacier, but now this year could surpass those previous records. According to data collected by scientists in Greenland, 7.38 feet of ice melted this year, in 2012 6.3 feet melted. The extreme temperature change even caused Summit Station, the research station at the highest elevation point on the glacier, to rise above freezing point for at least eight hours. The station was recorded to have surpassed 33.8 degrees. Scientists stated that the 2019 heatwave was much more serious than the melting in 2012 because it lasted longer and it was much warmer. Scientists estimate that the glacier has lost over 9 trillion tons of ice in the past century, and they predict that it will lose at least 287 billion tons every year. Scientists claim that this year alone, the melting has caused over one millimeter of sea level rise. 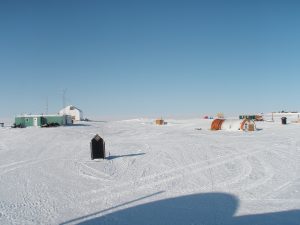 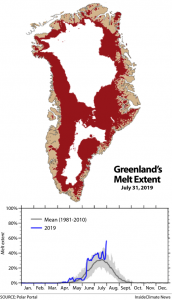 The loss of ice is only continuously getting worse and worse as time passes. The outer areas of the glacier have seen the worst of it. The inner parts of the glacier have gained some ice in previous years which is very unusual, but it is still not nearly enough to make up for all of the other ice that was lost. When the ice melts on the surface, the water then flows down the glacier creating streams that flow to the sea. These streams carve deep into the ice, removing more ice as they flow. Back in 2010 scientist said that we needed to act before 2020 or else the effects of climate change would be irreversible. We are almost to 2020, but no serious actions have been taken to solve this major problem. If nothing happens soon, the world might change drastically, perhaps it is too late to fix this problem.