Congressman Elijah Cummings, who represented the 7th Maryland district for 23 years, died on October 17, 2019. Many people are surprised and horrified because he was only 68, but he had had two surgeries in the past year, for his knee and his heart, that may have led to the complications that caused his death.

On the morning of October 25, Cummings was laid to rest in the Capitol, the first African American congressman to do so. Around 4,000 people attended his funeral, with speakers such as Barack Obama, Bill Clinton, Nancy Pelosi, Cummings’ wife and daughters, and readings by Elizabeth Warren, among others. Reporters on the scene from CNN told that the eloquence of speakers such as Obama bluntly forced into the faces of Americans the fact that our current president Donald Trump lacks the same speaking skills.

Most recently, Cummings’ most important accomplishment was heading the House Oversight and Reform Committee, a group of congressmen and women that has the power to subpoena documents and investigate.

He prides himself on sticking with his roots, which he shows by living in inner-city Baltimore, one of the regions that he represents, and makes his address known so that constituents are always able to reach him. 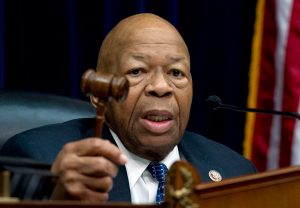 His first entrance to politics came in 1983 when he was elected into the Maryland House of Delegates. Representing a primarily democratic district in a democratic state, Cummings was able to get a lot of his agenda items done during his time in the Maryland House. When he moved to Congress, however, according to CBS news, he noticed the harsher party division lines and the difficulty in getting things done. His main goal has always been to help the poor and needy in inner-city communities.

Elijah Cummings will be missed by all. He was widely respected because of his dominating speech and care for his own people.