First Man to Run a Marathon in Under Two Hours

On October 12, 2019, Kenya’s Eliud Kipchoge became the first person to run a marathon in under two hours. He completed this feat in 1 hour, 59 minutes, and 40 seconds. This is a monumental event in human history, as such a time has never been achieved before, and times far better than it possibly will never happen. Yet, Kipchoge’s amazing accomplishment has drawn controversy over whether it is a legitimate record. 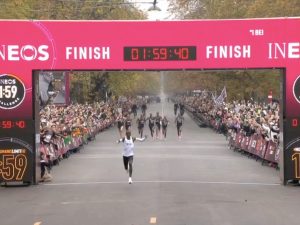 The original marathon was not quite like the marathons we see today. Over 2,500 years ago, the first “marathon” was ran by a Greek man, named Pheidippides(some refer to him as Philippides). In 490 BC, at the end of the battle of Marathon, Pheidippides was tasked with sending the message of victory against an invading Persian army, from Marathon to Athens. His message to Athens was, “Rejoice, we are victorious”. After this, the legend goes that he dropped dead. Interestingly, an event called the Spartathlon is held today as well. This event depicts the historical run of Pheidippides, from Athens to Sparta, because it is believed he went to Sparta requesting help against the Persians, before the battle of Marathon, in a day and a half.

Kipchoge’s historic race is certainly one of the greatest moments of the 21st century thus far. As he crossed the finish line, he was nothing but happy. Immediately after completing the race, he hugged his wife, pounded his chest, and smiled. He said “I’m the happiest man” and “No human is limited. You can do it”. Those are quite humble words coming from a man who just made a new world record. However, his feat may not go down in the record books at all.

Kipchoge’s time will not go down as the fastest marathon of all time. This is because the marathon was not an open event. The race was held on a closed off 6-mile course in park in Vienna, Austria. Also, he was aided by around three-dozen pacemakers who subbed in and out during the race. These runners helped him keep pace to go under two hours.

Despite not counting for the official world record, Kipchoge still received much praise. Kipchoge still holds the world record for official marathons though. In 2018, he set the record in Berlin, running the race in 2 hours, 1 minute, and 39 seconds, which still holds true. Kipchoge’s hometown, Eldoret, Kenya, made sure to tune in, and celebrated everywhere for one of their own. The Kenyan President, Uhuru Kenyatta, even congratulated him on twitter, saying “You’ve done it, you’ve made history and made Kenya proud while at it”. 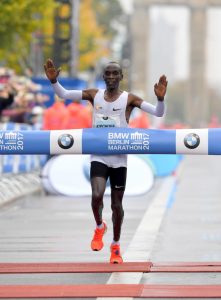 Although Eliud Kipchoge’s unofficial record does not hold the world record, it is still a massive landmark for humans. No one in recorded history, up until now, has been able to run a marathon under two hours. This will definetly go down as one of the most important events of the 21st century.