You Are Here: Home → 2019 → October → Kevin Plank steps down from Baltimore based company Under Armour

Kevin Plank steps down from Baltimore based company Under Armour

On October 22, Kevin Plank, founder and longtime CEO of Under Armour, stepped down as CEO of the company. He will become the executive chairman and brand chief of Under Armour. This comes at a time when Under Armour has been falling behind its competitors, and struggling to grow. Under Armour’s North American sales declined 3% from a year ago. Also, the company has been at the center of lots of controversy, putting the culture of the company in a questionable state. Plank will be replaced by Patrik Frisk, the current COO, and he will takeover as CEO on January 1, 2020. The movements of Under Armour leaders shows in today’s age how easily a company can be at the forefront of America, but take a step in the wrong direction, and hurt themselves immensely.

Under Armour has deep roots in Maryland, through Kevin Plank. Plank is from Kensington, Maryland, and attended St. John’s College High School. There he played football, and later went on to play at the University of Maryland, and earned a BA and MA in Business Administration. Under Armour started as an idea when Plank thought how annoying sweat drenched cotton t-shirts were, and tried to find a solution. He then created shirts that wicked sweat from one’s body. After creating his product, he launched his business from his grandmother’s basement, and had his professional football friends try his shirts, and hand them out to teammates. From there, it skyrocketed. Word got out quickly and everyone wanted an Under Armour t-shirt. At the end of 1996, the company made $17,000, but in 1999, business had a huge takeoff. Plank ran an ad in an ESPN magazine, generating $1 million in sales. Currently, the company resides in Baltimore, Maryland, employing 11,000 people. However, this is just one example of a clothing company making it in America. The textile industry in the United States began long ago.

In 1789, Samuel Slater came to the United States from Great Britain. In Britain, he worked in the textile industry, and brought this to America. This was not easy however. In Britain, it was illegal to share any information regarding the industry or even leave it. Slater came to America, memorizing all the details involved in the textile industry, including any machinery. In 1790, Slater set up his first cotton spinning mill, powered by water, in Pawtucket, Rhodes Island. Slater’s work helped begin an industrial revolution in the United States, and others improved on his American textile industry, such as Francis Cabot Lowell, and the Lowell System. 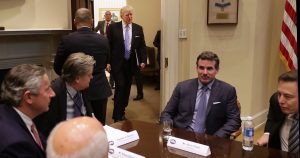 A main reason in Under Armour’s somewhat downfall, and Kevin Plank’s downfall, can be attributed to Plank’s actions. The first in this sequence of events occurred in 2017, a time when the company was not doing well already, and had just had layoffs. Plank publicly endorsed Donald Trump in a CNBC interview, to the dislike of some of his employees. At this time, he was also pursuing other business ventures, stretching himself thin. Plank opened a hotel and distillery in Baltimore. Also, the Wall Street Journal published an article in November 2018 criticizing Plank, claiming he was highly unprofessional, due to alleged instances of Under Armour executives expensing trips to strip clubs. Negative actions such as these of the few, with no consequences, but having an awful impact on the many, have been commonplace in the news recently. Under Armour is just one case. Organizations like the NBA have been in a very bad light, since its controversy with Hong Kong and China.

Kevin Plank’s actions show in how today’s society a company can be publicly shamed for only a few actions of one person, forcing the organization to take a negative step, but also hurting anyone who is a bystander, such as employees. Kevin Plank’s actions show what is able to happen in the future, through the power of news. He has been almost forced to step down, because of how effectively the news was able to portray him as a bad person. This can be seen as a prelude for what can happen to high profile companies in the future.