The United States have deployed troops into Saudi Arabia. This is in response to the oil attacks. On September 14, 2019 around 4 am, somebody bombed a United States owned, plot of land used to extract oil. The problem is, nobody knows who did it. Secretary of State Mike Pompeo believes that it was Iran, stating, “Iran has now launched an unprecedented attack on the world’s energy supply.” President Donald Trump also claimed that it was Iran, but later seemed more unsure. He left Saudi Arabia to come to that conclusion themselves, but stated the the US was “locked and loaded.” Things have become more confusing however as Iran has denied that they were responsible for the attacks and Yemen has taken responsibility. Specifically, a Yemen radical group called the Houthis claimed responsibility. The United States are questioning this however as satellite images show that the missiles came from the north. This is of importance because Yemen is south of Saudi Arabia and Iran is north. This story could become long term news as this could possibly lead to war. Yes, the United States is deploying troops, but this is not all out war yet. The “hidden” news story here is how aggressive President Donald Trump will be. Trump always states that he puts America first and will be aggressive if met with hostility. Will Trump send us to war? Will he send us to war without knowing who the real enemy is? Is America really first? It is time to find out. 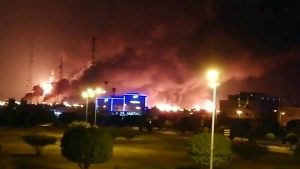