You Are Here: Home → 2019 → October → Severn Football Dominates as They Win Their First Game of the Season 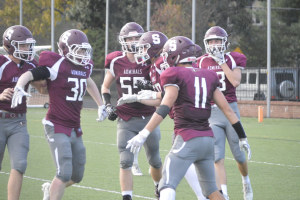 This past Friday on October 25th Severn Schools’ Varsity Football team had their first win of the season. The admirals began their season with losing the first 8 games. However, on Friday the team dominated Mount Carmel 41-12. The game started off with an even battle as Mount Carmel ran for a touchdown on the first play of the game. However, Severn came back as Collin Ervin ran for a touchdown to start the game 7-6. Throughout the first half, the opponents were nearly tied. The half ended 21-12.

Severn shut out Mount Carmel through the entire second half. Nick Shade ran for a touchdown during the beginning of the second half. Quarterback, Jacob Darrow, threw two touchdown passes for Joe Kantowski.

The admirals were “electrified” (Colin Donegon), during and after the game. This upcoming Friday on November 1st,  the boys play Severn’s rival, St. Mary’s. This game is called the River Classic.

The Capital Gazette wrote on the event as well: 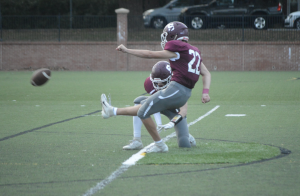