36 years ago, three teenage boys were sentenced to life in jail after being accused of murdering  had been sentenced to life in 1984 for killing a 14-year-old boy a year earlier. The now men, Alfred Chestnut, Andrew Stewart and Ransom Watkins, were freed on Monday, November 25th in Baltimore after a judge cleared their convictions after taking another look at their case. 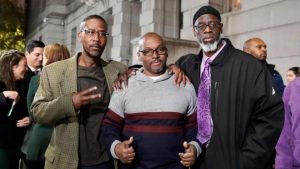 The case was reopened after new evidence was recovered and sent to the Baltimore’s Conviction Integrity Unit by Mr. Chestnut. The men were arrested in November 1983 following the death of DeWitt Duckett. DeWitt was shot in the neck by a fellow classmate at a Baltimore junior high school. This incident received a lot of news coverage due to the fact that it was the first fatal shooting of a student in Baltimore.

“These three men were convicted, as children, because of police and prosecutorial misconduct,” Baltimore state attorney Marilyn Mosby said after the men were released. In a statement, her office said “detectives targeted the three men, all 16-year-old black boys, using coaching and coercion of other teenage witnesses to make their case”.

Case documents had been sealed by a judge, but Mr Chestnut obtained them last year with a public records request. At a press conference, Mr Watkins said “this should never have happened.”

“This fight is not over,” he said. “You all will hear from us again.”