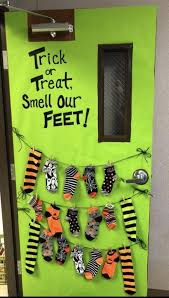 JEVYN: “What was your vision when you chose to host this contest?”

JEWEL: “In all of the 6 to 7 classes you have, each class is one hour long. But in the morning with your advisory you only get to spend ten minutes with them. I think this contest will allow advisories to bond and interact with each other especially for freshman. For the seniors I think we should cherish the little bit of time you have left with each other.”

Most advisories brought in a snack or some candy to eat during the time when they were not decorating the door. There was some slight controversy going on when students were told they would have to bring in their own supplies.

JEVYN: “Why do advisories have to spend more money on our own supplies?”

JEWEL: “For the past couple of years that we have been doing these decorating contest we have always to students to bring in their own supplies. It wouldn’t be fair to just switch that all of a sudden. Also it so the art supplies don’t go missing or get damaged in any way. Even for the Sing For Your Supper banners students aren’t allowed to use the art supplies and told to bring in their own materials. We do appreciate to everyone who did go out and buy their own supplies and participated in the contest.”

The Halloween Door Decorating Contest was a great event hosted by Spirit Captains and they worked hard behind the scenes to make it happen.