Airbnb is an online company that collects commission from both home-renters and their guests. Basically, Airbnb has a website where they list homes that are owned by the home-renters as available to stay in by guests. These guests then pick out a home they would like to rent for a few nights and pay for their booking. After paying, Airbnb collects 3% of the money from the host and anywhere from 6% to 12% from the guest(s). However, before all of this can occur, the home-renters must go through a verification process and be approved. Even though guests can see that their hosts have been verified by seeing a badge on their pages, some hosts have given Airbnb and their guests inaccurate information regarding the rental homes. Because Airbnb does not constantly check their hosts for the inaccurate information they are giving guests, these sketchy hosts fly under the radar and can continue to lie to future guests.

Recently, Allie Conti has uncovered a nationwide scam regarding Airbnb and their failure when verifying homes. While on a vacation in Chicago with two other friends, she received a phone call from her hosts Becky and Andrew, they informed her that 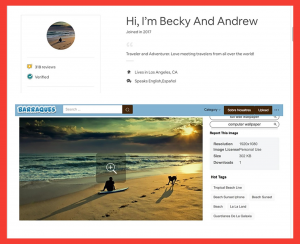 the original home they had planned to stay in had plumbing issues from a previous guest. After giving her this disappointing news, they then continued to inform her that they had another home she could stay in that was “three times bigger”. The hosts sent her photos of the new home, appearing to be much more modern and nicer, she agreed to stay there until she could go back to her original Airbnb. They also promised her a partial refund for the inconvenience. However, after arriving she discovered that the bigger, more luxurious home she was supposed to be staying in was more of a flophouse. All the furniture was completely different and much more worn-down. Also, they discovered that the door had been left unlocked upon arrival. After discovering this and being disappointed, the hosts proceeded to ask more of Conti, begging her to give them a 5-star review and let them
know the issues she had in a personal message rather than writing the issues in her review. Then, she asked them about her partial refund she had been promised by them and they ghosted her, basically just never answered a single text or phone-call again. Because she was ghosted, she reached out to Airbnb for the refund. But to her disappointment she was only refunded a small fraction of what she had paid because Airbnb’s refund policy says they have the “final say in all disputes”. This policy has made it easy for scammers to get by because their guests can’t receive full refunds and are advised to cancel if they are not okay with switching to a different house.

The feeling of being scammed left Conti with an uneasy feeling, and rather than letting it go, she decided to take matters into her own hands. After reaching out to several guests who were put into similar situations with different hosts, she decided to take a look at these properties online. She discovered that someone was running a huge scam by using basic names as hosts, with the same pictures for every home, but with different addresses. Every one of the guests she interviewed had the same issue 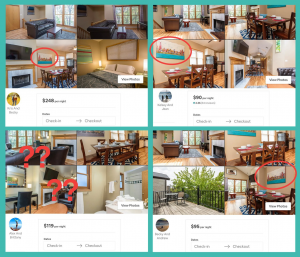 where the original Airbnb they were staying in suddenly became unavailable, they were promised a bigger and better home, sent pictures of a new home (all the same pictures to each guest), and given a terrible home not similar to the pictures they were
given. Not only did all these guests have the same experience, but none of them were given a full refund either, they were given a small fraction or nothing at all. But the biggest thing that all these guests had in common was the home that they were moved to. They were all actually homes that were all in buildings owned by a company called Abbot Pacific.

Abbot Pacific was a company that was run by a man known as Shray Goel. Shorty after

Conti uncovered this, she began calling the number of the company. She got into contact with someone and began asking many questions. After being left with no answers, the phone call ended, and she went back to the website to

look more into it. However, when she returned to the website it had been disabled, and eventually completely disappeared with no trace. Additionally, after she had reached out to the company, all the homes “owned” by people like Becky and Andrew rose to $10,000 per night, making it go unseen by people looking to rent.

Finally, after uncovering the scam going on in this industry, Conti emailed the Airbnb’s press team about the fraud and her evidence of it. But Airbnb didn’t do much. They only suspended the listings until further investigation and told her they would contact her once they had finished the investigation. However, no one ever got back to her or did anything about the scam that was uncovered. Due to the lack of urgency to fix the issue, Conti took it to the press and exposed the huge scandal. Not long after she got this published in Vice News, the FBI contacted her regarding her claims.