Each year, 46 million turkeys are killed for Thanksgiving. 99% of the turkeys are raised on factory farms and have their beaks and talons ripped out after hatching in an incubator. The turkeys don’t receive anesthetics and have to go through a

great deal of suffering without any relief. The turkeys are then crammed into dark sheds and must live amongst each other’s feces. The animals get aggressive with each other because they are in a stressful environment and in some cases, the tight spaces lead to cannibalism amongst the birds.

Once the turkeys reach a “market weight” they no longer receive food and water and are roughly transported to slaughterhouses. Some of the birds don’t even make it to the slaughterhouses because they die through harsh transportation. 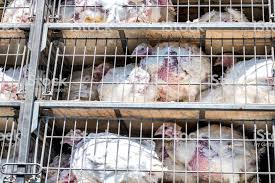 The turkeys that most Americans eat on Thanksgiving are factory bred turkeys rather than wild turkeys. The turkeys are bred to have larger breasts which causes them to tip forward because of the awkward weight which prohibits them from moving. The male’s breasts are so big that they cannot naturally mate; if the birds can’t mate then humans step into the picture. Hens are artificially inseminated in brutal ways.

I don’t believe that eating turkey on Thanksgiving/eating meat at all is ethical. Animals should not have to live their whole 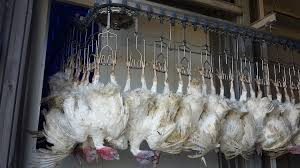 lives in unnatural and stressful environments. They are born to be slaughtered and that is not a life for an animal. The animals shouldn’t have to live in fear their whole lives and experience pain just for human benefit.

There are other options when it comes to Thanksgiving dinners. Meat can be skipped overall and vegetarian and vegan options can be put into place; many companies have created vegan turkeys. However, if a drastic change such as removing all meat and dairy from a Thanksgiving table is too much, families could start by skipping the turkey and replacing it with ham or chicken. Thanksgiving does not need to be centered around a turkey as it has in the past. Time is always changing and switching your centerpiece at Thanksgiving does not have to be very dramatic. Eating turkey has become a tradition, but new traditions can be made.