At 2:00 pm on November 6, the fire alarm went off and caused a frenzy. The alarm could only be heard in Creeden and students immediately questioned the legitimacy of the alarm. Everyone shared laughs and continued to talk as we made our way to Joe’s Field. I stopped a few students who were going to continue heading to their next class because they thought other students were joking when they said the alarm

was going off. Everyone uniformly lined up on the field and was accounted for. Many students believed that we would quickly head back inside like a normal drill, but faces began to scrunch when firetrucks could be heard in the distance. Trucks filtered in from either direction of the school entrances and firefighters jumped to action. While the “drill” was happening, I made sure to keep my ears peeled for any insight I might find. I heard from multiple different students that they saw the firemen begin to run a hose into the school. I did not see it myself, so I am unsure of the credibility. One student remarked, “I am missing a test right now!” to which another student responded saying, “It’s all about safety.”

How did this happen? Did “some kid pull the fire alarm for fun?” asked Flora. During the possible drill, there were also some technical difficulties that were encountered. The microphone/megaphone that would be used to report to students of updates throughout our time outside failed to work leaving the students and teachers wondering what the next step was.

After everyone received the okay to go back inside, there was word that either a junior accidentally got his backpack attached to the alarm or that a freshman pulled it because they did not believe anything would happen. A teacher (who will remain anonymous) also stated that this drill was definitely not planned and that something must have gone wrong. 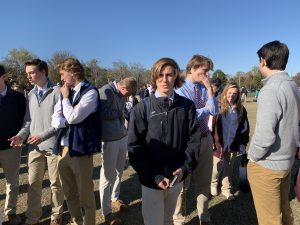 Now, the issue of everyone’s safety is being brought up as well as several other questions. Why didn’t alarms go off in Teel and McCleary? How were the other students informed to get out of the building? Are the alarms going to be changed? Was this just a faulty error that can easily be fixed?

I spoke with Mr. Soden in hopes that more information would arise. Mr. Soden said that everyone was accounted for and that this happened to be very uneventful. He also confirmed that the alarms did not go off in Teel and McCleary and is aware of the issue. When I asked him what the cause of the “drill” was, he said it was “to be determined.”