Seniors Give Back One Last Time

As the 2020 class is getting closer and closer to graduating, we have some tasks that we need to complete before we graduate. One of these tasks includes collecting and giving the Senior Class Gift, a donation of money by the senior class for the school. The gift was first mentioned in the Tuesday morning class meeting that we have every other week, where Layne and others informed our class that we needed to begin collecting money and that we had a 2 week deadline. We were also told that 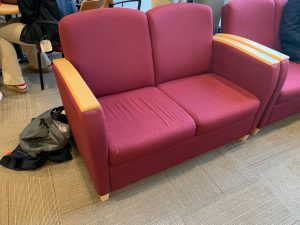 our goal was to collect $520 and have 100% participation. After listing our goals, we were told that our donation would go towards a fund to help improve Creeden Commons for future Severn seniors by replacing things such as couches and chairs or adding more tables for work space. After that, Mrs. Wesley told us that every single advisory was required to attend an alumni breakfast with one other advisory. During the alumni breakfast, they provided multiple chicken mini platters and just reiterated the goals Layne had presented during our class meeting.

Even though we had the goal of getting 100% participation, some students were very against donating to the school. Some students argued that their parents already pay so much money for tuition and that they don’t want to donate money towards something that won’t benefit them. Others argued that the school puts so much money towards buying breakfast, lunch, and dinner for students/faculty/events that they could put towards benefitting the school instead. However, with all that being said, majority of the class supported putting money back into the school to benefit future classes to come and wanted to help better the school.

Did we get 100% participation?

Did we accomplish it within 2 weeks?

After hearing about the controversy and results of the Senior Class Gift, Layne and Lindsay answered a few questions regarding it.

Are you in support of the senior class giving this donation? Briefly explain why or why not.

“I am in support of our choice to use our money to start a Creeden Commons improvement fund. I believe that, if used correctly, will be incredibly beneficial to every high schooler that comes through the high school because at some point they will experience and get to use that common space.” (Layne Bullock)

“Yes, I completely support the senior gift. I think giving money to better Creeden Commons is a gift that the entire grade can get behind, which makes it extra special.” (Lindsay King)

How does it make you feel knowing that our class got 100% participation?

“I feel very optimistic about our class spirit as a whole, especially following our astounding spirit week, it was nice to see us all come together yet again.” (Layne Bullock)

“The 100% participation goes to show how everyone actually supports our gift, which is super cool to say the least. I’m glad our grade was able to do so, as it feels like we’ve been continually killing the game lately.” (Lindsay King)

How do u feel about reaching // surpassing our goal?

“Our class goal was $520 and we shattered it by getting I believe almost, if not over, 900 dollars. Everyone really stepped up and donated from even just 1 dollar to 20 and everything really made a difference and I am so so proud of everything we as a class have accomplished so far this year, and it’s only November!” (Layne Bullock)

“Last year the seniors raised around $100+ with full participation; the fact that we did the same and more, even more than we expected, is awesome. We set a record for the food drive during spirit week, and now have done this, so again it shows the spirit of 2020.” (Lindsay King)