The Severn River Classic has been one of the most fun events at Severn School for decades. This is the Severn vs. St Mary’s football game. Each year the game is extremely competitive and the rivalry is very intense. This year the game seems like it will not be as competitive as previous years, but the Admirals are looking to turn their season around, and go out with a bang. 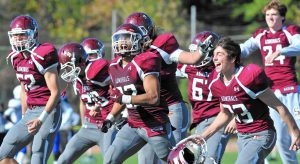 Last year’s game was a very close game, but sadly Severn lost 12-0. The game was centered on defense. Neither team was able to keep a consistent drive, with St. Mary’s two touchdowns coming of off big plays. The Severn team was led by seniors Owen Cauley, Jon Jarosz, and Craig Stevens. Henry Rentz, the team’s spark plug, could not play due to an injury. Had the team had Rentz, the game’s outcome surely could have been different. In the last football game they would ever play, the seniors gave everything they had, and left it all on the field.

I interviewed senior captain John Mandish and senior leader Loukas Sotiropoulos before the game about their experience playing for Severn football, and about the Severn River Classic. John has played football his entire life, playing for the Davidsonville Gators, but only started playing football for Severn his freshmen year. Loukas started playing football in 8th grade for the Severn middle school team, immediately becoming a star. Here is the interview: 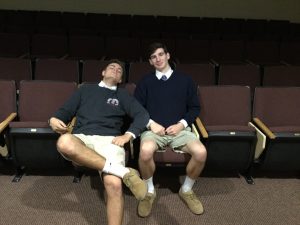 Josh: What has your football experience been like at Severn?

John: Senior year has definetly been my favorite year, just being a senior, and enjoying every moment.

Josh: Who are some players to watch for the game?

John: Every senior on the field. DB the dancing bear(Shane Levay). Campbell Grimes is a sophomore, you definetly have to watch him.

Loukas: Cam Vernon. He is a force to be reckoned with.

Josh: What about St. Mary’s?

Loukas: Now that Alex Wicks is out, I’m not too worried about any of their guys. They’re straight bums.

Josh: What has the game been like in the past?

Loukas: If I could describe it as one word, I’d say electric.

Josh: What does the rivalry mean to you guys, the team, and the school in general?

Loukas- It’s been a tradition passed down from generations—even back to the time Collin Ervin was a Saint. He remembers the rivalry vividly, and the same with Kyle Russell‘s dad who was a Severn Admiral. It’s just been electric. I’ve grown up on this rivalry and it means a lot to all involved.

John- I’ve definetly known about this rivalry for a long time. I’ve definetly always watched the game. I grew up watching the rivalry from elementary and middle school. For the team it’s a strong relationship amongst the players. It’s fun going out in games, even in practice, although sometimes it sucks—you’re doing it with the guys you love.

Josh: Any last words before the game? 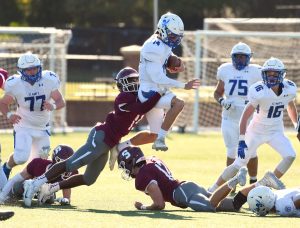 Sadly, the Admirals were not victorious, losing 21-3. However, they did not go out without a fight. The game was neck and neck for its entirety. Going into the 4th quarter, the score was 7-3 favoring the Saints. Some feel this was not truly showing of the reality of the game. The Admirals were within the 10 yard line twice, but could only capitalize once, with a field goal. That field goal came on a controversial decision to kick, being within the 10 yard line, and not going for the first down on a 4th and 2. Although this was a sad defeat, capping off the end of a disappointing season for the Admirals, every player gave it their all, and never gave up in their last high school football game. Those seniors being John Mandish, Loukas Sotiropoulos, Alex Lashgari, Jaden Queen, Chris Roth, Blake Misner, Quant’e Redd, Joe Kantowski, Collin Ervin, Colin Donegan, Josh Henrietta, Rehman Masood, Kyle Russell, DaVaughn Joyner, and Jevyn Avery. Their legacy will surely live on for years to come in Severn football.