Severn School as well as other high schools around the country probably saw a spike in stress levels last week. Is this because it is playoff time in fall sports? Is this because it is near the end of the marking period for some schools? No. I’m talking about the due date for Early Decision college applications. Many high schoolers have to turn in some of their applications by November 1, leading to a lot of stress on Halloween night. To add on to the stress of finishing applications, many schools still give homework, causing one jam-packed Halloween night. It leaves 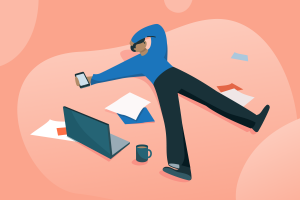 barely any time to even think about candy or costumes. Senior, Emma Carter finished her applications well before the deadline and still had to change her Halloween plans because of schoolwork. Instead of enjoying the holiday, she had to read 30 pages of a book and do 30 problems of Calculus. This took her around 2 hours. She believes that it would be helpful for Severn School to implement a rule to prohibit homework the day before major college application due dates for seniors. Senior, Brendan Murphy disagreed with Mrs. Carter and stated that it would be impractical for Severn School to implement such a rule. He sees the value in it for the students, but also realizes that school must go on. Brendan Murphy had no homework the night of Halloween and had previously turned in his college applications. Mr. Murphy makes a good point that schools must keep moving forward regardless of outside situations, but there is no denying that such a rule would help students such as Peter Baldwin who were scrambling to finish applications and had “a ton” of homework. Severn School as well as high schools around America should weigh the pros and cons in implementing this rule in the future. As for right now, I wish everybody a less stressful Halloween next year.