On December 4th, morale was high, following an exciting 55-35, win as Admirals departed from the gym that evening. Attendance at the Severn vs. St. Mary’s varsity basketball game broke records, however some avid fans were not able to support the team. To those unlucky sports enthusiasts who missed out, I say this: fear not! You can now attend the games without actually attending. I present to you… Admiral TV.

“Basically [Collin Ervin] and I were sitting in Economy, the period after the club fair, and he brought up the Gilman streaming. I thought it would be cool if we had something like that here. We looked at each other and knew we had to make it happen. 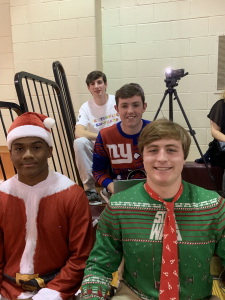 “We knew it was going to require a lot of money and research and we knew the partnership program was starting up, so we reached out to a few people at other schools to see what how they did it, as kind of a base of how we could get it off the ground. After that, we calculated our price and put together a presentation for Mr. Howell, Ms. Lynch, Mr. Sowden, Mr. Lagarde, and Mr. Domenech. It went really well and they all liked the idea.

“In October, the idea was approved by both the Partnership Program Committee and Mr. Lagarde. We ordered our stuff and got to work. The most challenging thing so far is that that neither Collin nor myself has any experience in anything this technologically advanced, so the learning curve was, and still is, pretty significant.

“It’s been cool to see some of our stuff go semi-viral, especially the alley-oop But even outside of that, we’ve had like 300 viewers on both streams which is really cool, and we’ve received a lot of positive feedback from the people that have been watching.”

Stay tuned on Twitter @admiraltv for any announcements and updates on game broadcasting. Go Admirals!