Can the Paralyzed Walk in the Future?

In recent years, many scientific advancements have occurred, leading to the saved lives of millions of people around the world. One common issue in the medical field is finding a way for those paralyzed from the waist down to, once again, take their first steps. However, these many scientific advancement advancements have caused stipulations in the medical field about this issue, leading us to the question, Can paralyzed Walk in the Future.

Scientists are currently looking into the possibility of using a Brain-Computer Interface(BCI) to allow the Brain to convert electric signals from the brain into a computer-mediated output, under the persons own control of course. The BCI was first used to allow those who were paralyzed almost entirely, to operate there own wheel chairs or to communicate with those around them. The famous scientist, Steven Hawking, had a BCI as a part of his setup, allowing him to both speak to the outside world and move freely in his electric wheel chair. In Hawking’s case, the input would be what he wanted to say, and the output would be what came out on the Speech-Generating device (SGD) that he had attached to his wheel chair.

The BCI mainly focuses on people who have severe motor impairments from spinal cord injuries, ALS, or other motor neuron diseases. The sensor for the BCI is implanted on the surface of the area of the brain responsible for movement, the motor cortex, and is then wirelessly connected to a computer. While in the modern technology this is nothing but a theory, previous test have occurred where electrical Signals are used to stimulate the Spinal cord.

Spinal cord stimulation and physical therapy have helped a man paralyzed since 2013 regain his ability to stand and walk with assistance.

With an implanted stimulator turned on, the man was able to step with a front-wheeled walker while trainers provided occasional assistance. He made 113 rehabilitation visits to Mayo Clinic over a year, and achieved milestones during individual sessions: 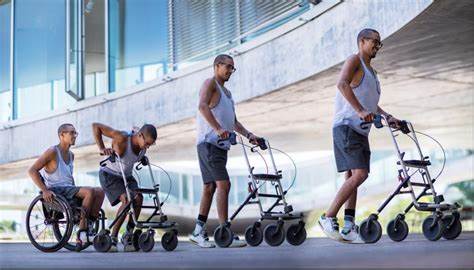 In the study, the man’s spinal cord was stimulated by an implanted electrode, enabling neurons to receive the signal that he wanted to stand or step.

While the stimulation of the spinal cord is not a sure-fire method for negating the effects of paralysis. It has the potential to help save millions of people from becoming vegetables in a wheelchair. The study of paralysis using the modern technology and the idea of a possible Brain-Computer Interface has become very important in the fight to allow those paralyzed to stand tall once more and live their lives.

About “Long News”
The Severn Current staff adds an article every so often in our “Long News” category. Articles appearing in this category we see, potentially, as the great and important news stories of the future…the seeds are here an now, all around us, but the story will play out much more forcefully over the long run. In reporting on these topics, we hope to provide a counterpoint to today’s accelerating and increasingly short-attention span culture: to promote long-term thinking (and action) and make it more common. This idea was a direct inspiration from the Long Now Foundation. We encourage your ideas and submissions!