On Saturday a family held a Gender Reveal at El Dorado Ranch Park on California. Fire fighters say the couple was using a smoke machine which malfunctioned and caught fire September 6th around 10:23 a.m pacific eastern time. The fire quickly spread to the four foot dry grass surrounding the machine, which is prefect tinder to quickly catch fire. Frantic the family began throwing water bottles on the fire in an effort to put it out. These efforts proved useless. The family quickly called 911. 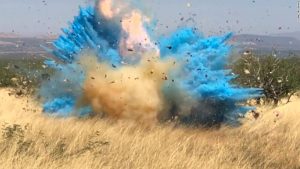 The fire quickly spread from the park heading north towards Yucaipa Ridge. As of last Monday September 7th the fire has engulfed 8,600 acres of land and was only 7% contained. Oak Glen, Yucaipa Ridge, Mountain Home Village and Forest Falls have been forced to evacuate their homes. Thankfully no injuries have been reported at this time.

The family have been couropupating with fire fighters and local athouties. As of now no arrests have been made. However the district attorney could file charges which hall hinges on the injuries and property damages caused by the fire. If the district attorney does choose to press charges the person who turned on the machine is the only person who will be facing charges. The charges could include “igniting the land” and arson. If charges are pressed the district attorney and court will have to decide whether the charges are misdemeanors or felonies based on how reckless they are found. Based on how the are charged will determine the penalty. 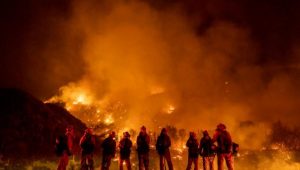 Firefighters beg people to be more careful and responsible around fire. Wildland fire management information and U.S. forest service research data data archive estimates that around 85% of wildfires are caused by humans negligence such as, campfires left unattended, the burning of debris, equipment malfunctions, throwing burning cigarettes, and arson. These fires result take around 2 billion dollars per year to fight. The 2 billion dollars does not account of the damage caused to property. Firefighters beg people to be extra cautious and pay attention to your surroundings to prevent another wildfire