Are Modern Politics a Joke?

In the recent years politics have seemingly been depleted in their seriousness. On a daily basis, we see multiple memes, jokes, and offensive statements about both of the running mates for the current elections. Whether it be for a supreme court justice, our president, our vice president, or even members of the senate, politics have become a sort of laughing stock in our country. Take political signs as one common example. Are they even political anymore?  Truth be told, a majority of these signs are meant to be a jab at the poor state our country is in politically. 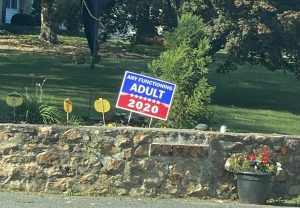 One particular sign, meant to be a joke about how “Any functioning adult” can be our president in 2020 is meant to bash both presidential candidates for their, excuse my language, genuine stupidity and ignorance for just about any topic currently impeding our country. Obviously our current candidates aren’t our top choices for president of the United States. But in reality, just any functioning adult cannot take up the role of president of the united states. A lot of people dislike Donald Trump, including myself, for some of the things he has said and done, however, it can at least be appreciated that he works harder than the average person and that all he’s obtained hasn’t just been given to him. The same could be said Joe Biden, the other presidential candidate. He may questionably be a pervert and is for some reason obsessed with the scent of a women’s hair, however, he has had his fair share of experience in politics and it can be gone so far as to say he was a decent vice-president when Barack Obama was in office 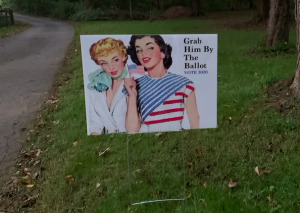 A second sign recently made specifically for this 2020 election refers to Trump’s quite repulsive statement, made famous before the 2016 election. Well, there is not much one can say about this except, “Trump my dear friend, you did this to yourself”. Though this sign is quite inappropriate, it just goes to show you that whatever you put out in the world comes back at you twice as hard, and in this case, thrice. On a more serious note, this sign is 100% trumping the sanctity and seriousness that our countries ancestors worked so hard to establish in our history. Just think, 200 years ago when our country was first being established, would signs like these be made to poke fun at political figures such as George Washington. The most likely answer is no, because back then people had respect for the system that politicians had worked so hard to establish. Obviously, every now and then there would be people who weren’t a fan of one of the candidates and would poke some fun at them. But back then you wouldn’t see 1,040 signs on elm street about how foolish 2020 candidates are. However, I don’t want to solely put this blame on the citizens either. Trump does it to himself with his lack of a censor that most people have. And for Biden i don’t even know what to say, the dude is just a straight weirdo.

To be completely honest, the current political state in the United States is just embarrassing. In fact, from the outside looking in, multiple countries around the globe: such as Germany, England, and France, have out-right said that we are making a fool of ourselves. So it can be said that the modern day politics in the U.S. are most certainly a joke.