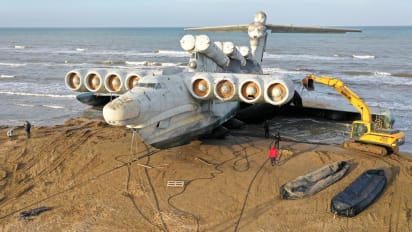 The Caspian sea monster was a giant ground effect vehicle that was developed by the Soviet Union during the cold war. This giant vehicle was called  a ekranoplan before it sank during testing and was called the Caspian Sea Monster. This plane/ship hybrid would skim the surface of the water from 3 to 16 feet to take advantage of an aerodynamic principle called “ground effect.” Which made this  giant very difficult to detect on radar even though the giant was almost as tall as the Airbus A380 jumbo jet but longer the jet. While the giant vehicle weighs 267 tons it can reach the max speeds of 340 mph using the ground effect. The Ekranoplan was pulled out of the Caspian Sea July 14, 2020. The ground effect was pulled its weight by the 8 turbofans that it had. The Ekranoplan was mainly was going to be used for was sea attacks with the 6 anti-ship missiles on the top of the hall. The only completed Ekranoplan was moved to Derbent. The Ekranoplan was designed by Rostislav Evgenievich Alexeyev in the 1975 and was used from 1987 to 1990’s and would be cut before the fall of the Soviet Union.