You Are Here: Home → 2020 → November → News in the American Revolution

News in the American Revolution 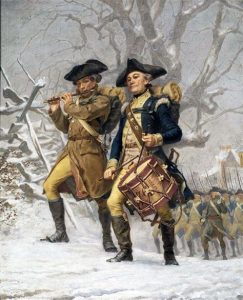 The news in the American revolution played a very large role in the entire war. It took days and sometimes even months to get the word across states and It took especially long to get words across the globe back to England. If it takes months to get news to the king in England, it therefore took months to bring more soldiers and supplies to the new found land. One of the most famous news ventures was Paul Reveres ride. He rode on horse back to deliver news of a surprise attack on a town. He rode as fast as he could to alert the town and to help them evacuate. His actions saved thousands of lives and most likely saved the country. It can be argued that if it weren’t for what he did that night then the war would’ve been lost and we would be living in a much different society today. From horseback to cars and trains to tvs and phones news has greatly evolved. Will there be another news revolution? Possibly. Maybe there will be tvs in cars that have cable so you can watch tv while your car drives you to work.