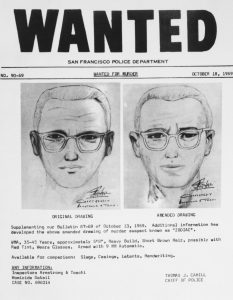 Francisco from the 1960s to the 1970s. He was linked to at least 5 murders but it is predicted that he murder many more people. The Zodiac Killer was never caught so he still maybe walking this earth. The Zodiac Killer is famous not only for alluding capture but also for his coded messages and for taunting of law enforcement. This case gripped the world as everyone tired to find the killer and some are still trying to identify the killer.

David Faraday (17) and Betty Lou Jensen (16)  were his first murders linked to him. They were killed in Benicia City on Lake Herman Road on December 20, 1968. The couple was on their first date the couple first went to a friends house then to a restaurant and ended the night at Lover’s Lane.

Around 11pm both their bodies were found shot near his car by Stella Borges who lived near Lover’s Lane. Robert Graysmith used forensic evidence to recreate what he belived happened. The killer pulled up next to the couple car. They then walked towards their car and told David Faraday to get out of the car while holding him at gun point. As he was exiting the car he shot David Faraday in the head. Betty Lou Jensen then fled from the car and got 28 feet before being shot in the back five times. Then The killer quickly drove off. Solano Country Sheriff’s Department, investigating the case, was unable to find any leads.

The Zodiac Killers next victims were Darlene Ferrin (22)  and Michael Mageau (19) , they were killed in Blue Rock Springs Park in Vallejo. They two victims had parked their car when a second car pulled up and parked next to their car drove off only to return in a couple of minutes and park behind their car. The Zodiac Killer approached the passenger side of the car. He shinned a light in their face and proceed to shoot them. On July 5, 1969 a unknown man called the Vallejo Police to report the resent attack and claim not just the murder of Darlene Ferrin and Michael Mageau and also David Faraday and Betty Lou Jensen. The police were able to trace the call to a phone booth at a gas station. Ferrin was pronounced dead at the hospital but Michael Mageau survived the attack. He was able to give a description 26 to 30 year old, 195 to 200-pound or possibly even more, 5 foot 8 inch white male with short, light brown curly hair.

After these two murders the Zodiac sent three letter on August 1, 1963 to the Vallejo Time, the San Francisco Chronicle, and the San Francisco Examiner. In the letters the Zodiac took credit for the two murders each letter also had a third of a 408 symbol cryptogram which the Zodiac said contained his real identity. He demanded his letters be published on the front page or else he would go on a killing spree. He sent his second letter on August 7, 1969 to the San Francisco Examiner. In this letter he identified himself as the Zodiac Killer and also proved that he was the killer along with another another coded message to the police. On August 8, 1969 Donald Harden and Bettye Harden solved the 408 symbol crytogram. The message said he was collecting slaves for the after life, the letter also did not contain a hit to his identity.

The Zodiac was silent until September 27, 1969 when he killed Bryan Hartnell and Cecelia Shepard at Lake Berryessa. The two were enjoying a picnic when the Zodiac approached the two holding a gun. He was wearing a black executioner’s-type hood with clip-on sunglasses over the eye-holes and a bib ike device on his chest that had a white three-by-three-inch (7.6 cm × 7.6 cm) cross-circle symbol on it. He claimed he was an escaped prisoner and needed their car to escape to Mexico. He demanded they tie each other up after they were tied up the Zodiac 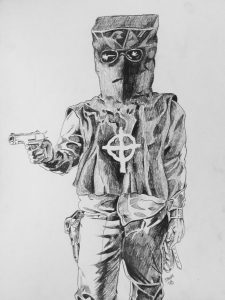 took out his knife and stabbed them both multiple times. Bryan was stabbed six times and Cecelia was stabbed ten times. After stabbing the victims the Zodiac walked to their car a drew on it. At 7:40  pm the zodiac called the Napa Sheriff’s office to report his crime. The sheriffs department was able to trace the call to a payphone, once they arrived at the payphone they were able to lift a palm print for the phone but were unable to match it to a subject. When the police arrived at the scene Cecelia was found conscious and provided a description of the killer. Cecelia later died but Hartnell survived.

His next murder took place on October 11, 1969. He got into the cab of Paul Stine one block from union square. The passenger shot the driver in the head stole his keys, wallet, and a piece of his bloody shirt. Three teenagers witnessed the crime and called the police. The police then received a call that a man matching the description was found walking on the sidewalk of Jackson street. But the officers did not engage with the suspect because they were originally told to look for a black suspect. After the mix up was sorted it was too late to find the man. The murder was not official linked to the Zodiac until October 13 when the San Francisco Chronicle was sent a letter from the Zodiac containing a piece bloody shift of the driver. 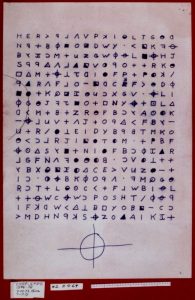 Paul Stine’s shirt and a threat to kill school children on a bus. The next letter was sent on November 8, 1969, the letter contained another cryptogram consisting of 340 characters this cipher has never been decoded. On November 9, 1969, the Zodiac mailed a seven-page letter calming that two policemen stopped and spoke with him three minutes after he shot Stine. On December 20, 1969 the Zodiac sent a letter to Belli saying he wanted his help. The Zodiac continued to sent letters to the newspapers and taunt the police. One of his last letter he taunted police by saying he had killed 37 people in five years.

As of now the case is considered inactive. The Zodiac has never been identify but people still try to find the killer. The website www.zodiackiller.com contains all the evidence, victims, suspect, and every piece of information on the killer. This website also includes a message board where people can disusses their theories on the identity of the zodiac killer. This man gripped the world with fear and mystery. Because his codes were published in the newspaper regualar citizens were getting involved in trying to catch this man and decipher his codes. This case still fascinates the world. 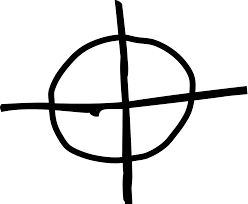