You Are Here: Home → 2020 → December → “David? Nobody Cares.” The True Takeaways from the Beloved Schitt’s Creek

“David? Nobody Cares.” The True Takeaways from the Beloved Schitt’s Creek

The sixth and final season of Schitt’s Creek dropped on Netflix on October 4th, after sweeping the 2020 Emmy Awards. The creativity, characters, and performances of this series portray many unexpected, underlying ties to family, comedy, and little reminders in everyday life. Many viewers love the show for its witty comments and comedic aspects, but the character development and life lessons are the true takeaways.

High school isn’t even mentioned once in Episode Four of Season Four, “Driving Test.”  Despite this, David Rose, played by Dan Levy, brings out the anxious high schooler who teachers and students know so well. On the way to his driver’s test, David’s anxieties are high. He makes a point that his sister Alexis (Annie Murphy) step out of the car so that he can do his twenty minute transcendental meditation before he fails the test. Her response: “Trust me, people aren’t thinking about you the way you’re thinking about you. You’re always overthinking everything and that’s why you fail all the time.” 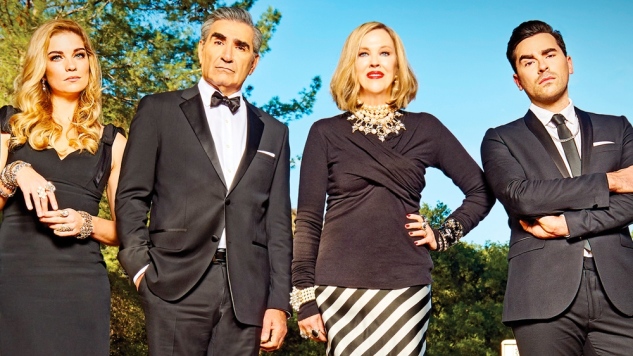 Alexis is reminding viewers that nobody is really looking at you. Nobody is criticizing or judging your every move. While the opposite may feel true to many, Schitt’s Creek reminds you that most people these days are too busy worrying about what others think of them to look around. If we took the time to just focus on ourselves and our confidence rather than what everyone else was thinking about us, we wouldn’t feel the urge to be perfect all the time.

The detriments that high school or the teenage years can have on one’s sense of self these days can be very strong. There is so much comparison and competition that nobody can truly focus on doing their best. Their fixation on others ruins the importance of personal growth. In the same episode of Schitt’s Creek, the driving instructor could care less about whether or not David passes his test. David says, “Umm. . . People care. I care, the driver examiner person cares.” Obviously, he thinks that’s all the instructor is thinking about.

Schitt’s Creek is written with a genuine connection to its audience. The world’s issues are reflected and brought up subtly throughout the entire series, some as jokes from the creative minds of Eugene and Dan Levy. It is all about people taking the time to notice and appreciate these lessons. “Driving Test” shows that although there is undoubtedly some judgement in the realm of high school, it’s not as prominent as our brains make it out to be. As Alexis Rose puts it: “David? Nobody cares.”