This week a mystery illness was found it India. The first case was reported on Saturday.  So far 546 people have been to the hospital for treatment and one person is dead. As of now 146 out of those 546 people are still receiving treatment int he hospital and the rest have recovered and been sent home.  It was first found in Eluru. 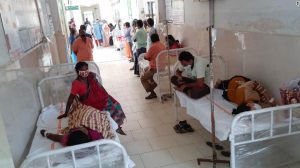 The death was a 45 year old man who was sent to the hospital due to epilepsy like symptoms. The autopsy was inconclusive.  AS of now the doctors are unsure what this illness is. The patients were tested for Covid-19 but their test results came back negative. They were also tested for many other viruses but all of those tests also came back negative. The symptoms found so far include nausea, anxiety and loss of consciousness. Blood samples also showed traces of lead and nickel. Some people are speculating that organochlorine, an ingredient in some pesticides, was to blame. The ingredient is used in the pesticides used in that area and it may have ended up on food grow in the garden. But during this time doctors and health officials are still unsure what caused this illness.