You Are Here: Home → 2021 → January → Headaches? Vision Problems? Trouble Sleeping? Screen Time May be the Culprit

COVID-19 has been a part of our lives for almost a year now, affecting numerous aspects of life for everyone either directly or indirectly. A major way in which the younger generation has been affected pertains to education. Beginning in March 2020, many schools transitioned to online learning, while others shut down for a few weeks with the intention of regrouping after things “settled down”. Many students treated the pandemic as a vacation from school that would last no more than a few weeks. As we all know, this was not the case, as a majority of schools continued on with either online school or hybrid learning at the beginning of this school year. 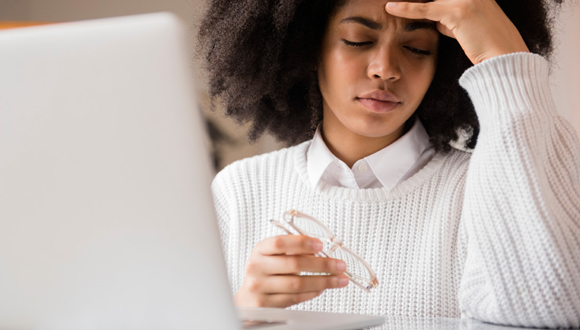 Online learning has proved to be difficult in various ways, affecting students’ mental health, study skills, and motivation. One major effect of this transition that I believe is overlooked is the amount of time each day we stare at computer screens. This great increase in screen time has taken a toll on the eyesight and productivity of many children. A study conducted by the Royal College of Pediatrics and Child Health researched the amount of time children between the age of 11-24 spent on devices throughout the day. The research found that children would spend an average of ten hours on devices throughout the day. But we should note that this research was conducted before online school became widespread! So we can only conclude that this number has only gone up dramatically over the last year. With the increase of screen time comes many side effects, such as eye strain, sensitivity to light, constantly being tired, and frequent headaches. Doctors stress the need for children to get eye exams, whether conducted at home (virtually) or in person. Simple adjustments can lead to reduced risk of eye damage, such as not sitting so close to your device, using blue light glasses, or simply taking small amounts of time throughout the day to take a break from your device. Doctors have also warned of the dangers of exposure to excess amounts of blue light emitted from computer screens that can lead to eye damage.

Although online learning is a great resource that has allowed many schools to continue to offer an education to children around the world, it is important to note the negative effects it has on children. Along with eye damage, students experience various other negative effects such as a decrease in productivity. Studies show that productivity levels have decreased during this time, resulting in lower grades, and a decrease in the amount of sleep students get. Schools have noticed this increase in screen time and have taken steps to decrease the amount of screen time. One example of this can be seen through Severn’s “asynchronous Wednesdays” (when we are fully remote). Although we do not know how long we will be learning online, it is nice to know that we have such a strong support system at Severn to help us through these times.