Zebra Spottings Near You!

This August, as many of you know, our neighboring county of Prince George’s had three zebras on the run. These zebras had escaped from Holly’s 300 acre farm, owned by Jerry Lee Holly, 76. There were originally 40 zebras in the herd at the farm. The zebra’s caretaker, Charles Gwyn, reported the missing zebra to animal services on August 26th, 2021. Holly, on the other hand, had no plans to find the missing zebras, although he was aware.

The zebras were a danger to themselves and others as they wandered through roads, neighborhoods, and other public spaces, and are known to bite or kick if feeling threatened. One zebra had unfortunately been found dead in a trap, just a few feet away from the farm, on September 16th. On October 19th, a local news helicopter saw another dead zebra within the farm’s enclosures, and reported it to authorities. The farm did not provide a cause of death. 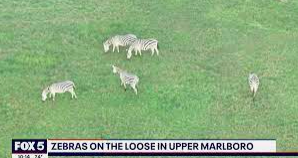 The Prince George’s County Department of Environment started to inspect Holly’s farm every couple of days, and will continue to monitor the 36 surviving zebras. They are not planning to seize the zebras, even though authorities gave Holly a court summons, facing fines up to $3,000 and 270 days in jail. He has been accused of failing to provide adequate food, water, shelter, and veterinary care for the zebras, and is being criminally charged with animal cruelty.

The County’s Animal Control Officers hope to humanely capture the two zebras still on the loose and return them to the herd. The plan is to lure the zebras into an enclosure with other zebras from their herd at Holly’s farm. Once the zebras are safe, the attention will turn to conducting further investigations to evaluate the chargers against Holly.