On the set of an upcoming movie “Rust” Alec Baldwin was seated on a church pew when he was handed a gun for the scene. In the scene Baldwin was to point a revolver toward the camera lens and fire the blank round. However when Baldwin fired the gun it was loaded. The ammunition hit Halyna Hutchins in the chest and Mr. Souza in the shoulder. Hutchins was then airlifted to the hospital where she later died. Mr. Souza was driven to the hospital where he was later released. 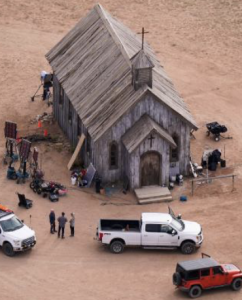 Hours before the shooting six members of the  crew walked off the set. Several days before the shooting there was at least two accidental gun charges inside a cabin that was apart of the set. Hours before the shooting that killed Hutchins six members of the  crew walked. They left due to working conditions, they  had complained about long working days late pay checks and a unsafe environmentNo Charges have been filed, but they are still possible. “If the facts and evidence and law support charges, then I will initiate prosecution at that time,” said Carmack-Altwies the district attorney in a press conference Mr. Baldwin is an “active part of this investigation,” Sheriff Mendoza said. After the shooting, he went to the Santa Fe County Sheriff’s Office to give a statement and answer questions.